It was a real scorcher outside during the pro women’s race – the sun was out in full force. Despite the heat, and another hard corner two, it was a very fast paced race. The hour long race seemed like it might end in a solo victory, but the lone breakaway was caught with one lap to go. It ended in another bunch sprint, with Harriet Owen (Hagens Berman | Supermint) taking her sixth victory at ToAD this year. Emily Ehrlich (CWA Racing p/b Trek) came in second on the stage followed by Peta Mullens (Roxsolt Attaquer) in third.

As previously mentioned, the race was very fast, there were $250 live on the second lap, with Pip Sutton (Specialized Woldpack p/b Jackroo) taking that prime win. Once again, it was a good mix of riders and teams on the front driving the pace. Twelve minutes into the race, Jordyn Hassett tried to jump off the front of the peloton, but because it was so early in the race and nobody went with her, she was pulled back to the field. There were a couple of two-place primes thrown to the field in the first half of the race, Maddy Ward (Amy D Foundation) taking one and Holly Mathews (Alumnus Project) winning another. Emma Chilton (Roxsolt Attaquer) sprinted to take another $250 and Lauren Perry (Fast Chance Women’s Cycling p/b THTF) came away with a $500 prime win. With ten laps to go, a group of four tried to make a break, but at Downer, there’s the Ben’s Super Prime, which this year was a $3000 prime. No one knew when they were going to ring the bell for the super prime, but with ten laps to go, it had to be soon and the field wasn’t going to let a group of four go ahead and take the win. They rang the prime bell for Ben’s Super Prime with nine laps to go. It was the yellow jersey of Harriet Owen who took the win, coming away $3000 richer. 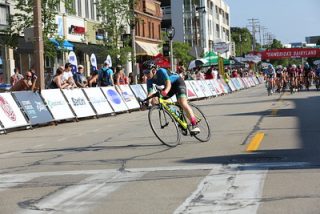 With six laps to go, another group of four took a quick look off the front, but this group had the yellow jersey, the points leader, and the Australian champion in it. If the main bunch behind didn’t chase, the stage would pretty much be over right there and then. They were brought back and with five laps to go, Pip Sutton tried to make the winning move. It looked as though she might win solo, but she may or may not have lost track of how many laps were left and slowed down considerably with one lap to go. It was Fearless Femme driving the pace for the final lap, but nothing could stop Harriet Owen on a winning streak. She took the win in front of Emily Ehrlich in second and Peta Mullens in third. Peta Mullens kept her lead in the Lowlands Points jersey, Harriet Owen kept her lead in the overall omnium, and Andrea Cyr (Velocause Centraal) kept her lead in the Oarsman Capital Cat 2 leader’s jersey.

After the sun went behind the buildings of Milwaukee, the temperature became quit comfortable outside. It was good race weather to say the least. At the end of a rather chaotic race, it was the yellow jersey, Cesar Marte (RCC) who sprinted to a win just in front of Moritz Malcharek (LKT Tean Brandenburg), who took second and Matthew Rice (Pro Racing Sunshine Coast) who took third on the stage.

It was another tricky corner two – on the first or second lap, there was a big crash, no one was seriously injured, but a good chunk of the field had to go back to the pit and get re-inserted into the race. The field size at Downer was the largest we’d seen so far in the series at over 100 riders. The difficult corners and fast pace caused many early splits in the race. The race itself seemed to be split into two stages. Only a mere seventeen minutes into the race, there was another big crash in the first corner. Although the corner doesn’t look bad, when you’re riding four or five wide on the road, seemingly easy turns can become really dangerous. The race was neutralized for a while so that emergency vehicles could be brought onto the course. Due to the break in the action and decreasing amount of daylight, the riders were only able to race for about an hour. 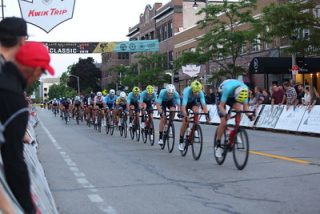 Seven minutes after they resumed racing, Wolfgang Brandl (ADHD Catella) and Ed Veal (Real Deal Racing) broke off the front of the race. John Borstlmann (Team Marc Pro p/b Gym One) tried to bridge the gap to the two up the road, but all three were reeled back in. Trying to move into the lead of the Lowlands Points Jersey, Borstelmann went ahead and won the mid-race points prime. Before the super prime, a couple more were rung out towards the end of the race. Luke Lamperti (LUX/Stradling p/b Specialized) won a $50 prime, Philip Weber (LKT Team Brandenburg) sprinted to win a $200 prime, and Ama Nsek (Imperium Racing) won $100. With nine laps to go, Gianni Lamperti (LUX/Stradling p/b Specialized) went on the attack, but was pulled back to the field. Ben’s Super Prime went live at $3000 with seven laps to go. It was the Aussie, Taj Jones (Pro Racing Sunshine Coast) who came away with that win. On the stage, it was the yellow jersey, Cesar Marte who powered to a win in front of Moritz Malcharek in second and Matthew Rice in third. John Borstelmann was able to move into the Lowlands Points Jersey while Travis Wold (New England Devo p/b Cadenc Wealth Management) kept his lead in the Oarsman Capital Cat 2 leader’s jersey.

The riders take to the streets of East Tosa for the final stage of ToAD 2019 on Sunday – don’t miss it!