Out of the total eleven stages of ToAD Muskego Park was really the transition stage – the go between from more rural places to the last four stages around the Milwaukee area. The setting of the stage was quite different compared to the city block type courses we’ve had so far. The 1.2 mile long course was in a park, so it started in the woods, went past a small pond/lake/beach and then went back into the woods. Much like most of the series so far, the stage ended in a bunch sprint. It was the Australian national champ, Beck Wiasak (Fearless Femme Racing) who won in front of Peta Mullens (Roxsolt Attaquer) in second and Harriet Owen (Hagens Berman | Supermint) finishing in third on the stage. 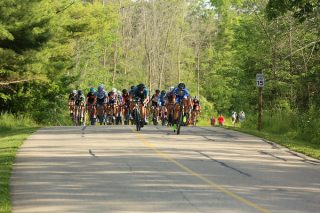 The stage was a hot one with temperature in the upper eighties, maybe into the lower nineties when the sun was fully out. The Muskego Park course had around 110 feet of climbing, which overall really doesn’t seem that bad, but coming up to the finish line, in the heat, after racing all out, with all 110 feet in one shot, the hill was, to say the least, not great. Contrary to the past few days, the pack was still all together for the first quarter of the race. At fourteen minutes into the race, Scotti Lechuga (Fearless Femme Racing) tried to get off the front on her own, but was brought back on the back stretch of the course. Maddy Ward (Amy D Foundation) was able to win a $50 prime 20 minutes into the race – a small sum compared to Janesville, but a prime nonetheless. Lechuga tried to go again a lap before the points prime, though because of the accelerated pace to get to the line, she was once again brought back. The points leader, Peta Mullens managed to take the maximum amount of points on the sprint. 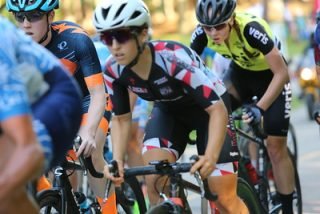 Mullens also managed to win $100 a few laps later. A breakaway including Charlotte Culver, the rider who always races in pearls, (Fearless Femme Racing) and Courteney Lowe (Fast Chance Women’s Cycling p/b THTF) that had gone out at six laps to go was brought back with three to go. Scotti Lechuga tried to give it one last go and took a look off the front with two laps to go. She was brought back again, but it was her teammate, Beck Wiasak who won the sprint ahead of Peta Mullens and Harriet Owen. Andrea Cyr (Velocause Centraal) keeps her lead in the Oarsman Capital Cat 2 leader’s jersey while Peta Mullens keeps her lead in the Lowlans Points jersey and Harriet Owen stays in the overall lead in the yellow jersey.

For riders across all fields, both the heat and the nasty little hill at the end of the course made for a more difficult day on the bike. Many riders just took the day off, including the yellow jersey Matthew Rice along with his entire Pro Racing Sunshine Coast team. In the bunch sprint the stage finished in, it was Ama Nsek (Imperium Racing) who took the win in front of previous stage winner Cesar Marte (RCC) in second and Enrique de Comarmond (NGCA Elite p/b Tyler Perry Stud) in third place on the stage.

Although the temperature should’ve cooled down due to the tree cover and it being later in the day, it stayed about the same as earlier in the stage. Racing in the heat is not much fun. One of the interesting parts of the stage was that the yellow jersey was taking the day off, leaving the opportunity open for a major shake-up in the overall classification. Luke Lamperti (LUX/Stradling p/b Specialized) tried an early attack one lap into the race, but was not successful. He did however win a $50 prime though. Ten minutes into the race, Lamperti’s teammate, Michael Garrison tried to give it a go along with the German, Moritz Kaase (Volvo Markoetter Team), though that move was pulled back to the peloton as well. Five minutes later, it was Ian Anderson (Team CCR Roofing) who decided to take a look off the front. The fast downhill section just after the start/finish line made it hard for people to get away because the chase was made easier by the downwards slope. A couple more groups tried to go off the front, but each time, the determined field was able to reel them back. 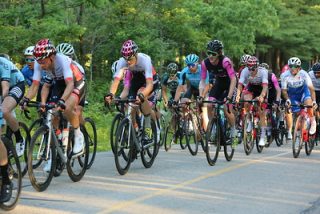 Midway through the race, the ToAD setup crew and the Tenspeeds Production crew started talking some smack to each other and it got to the point where the only way to settle it was a 100-meter dash down the finishing straight. Once the men’s field went through the line and the course was cleared, the announcers turned on the theme from ‘Chariots of Fire’ as the two crews did their best to sprint to the line (check it out on the ToAD Instagram account – @tourofamericasdairyland). The setup crew took both first and second place with someone from the Tenspeeds crew taking third. 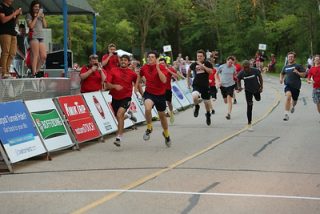 As the race continued on after the 100-meter dash, a couple more smaller groups along with a group of over nine riders tried to go off the front, though none were a major success. All groups were brought back before the finish and it was clear the stage would end in a bunch sprint. In the sprint itself, it was Ama Nsek who powered to the win ahead of Cesar Marte in second and Enrique de Comarmond in third. Marte regained the overall lead, the yellow jersey and Travis Wold (New England Devo p/b Cadence Wealth Management) kept his Oarsman Capital Cat 2 leader’s jersey, Lachlan Holliday (Piedmont College) also kept his lead in the Lowlands Points jersey.

The riders pick it up again in the city, on the much flatter course in Shorewood on Thursday!