A day that started out a bit cloudy and gloomy parted way to a mostly sunny sky and *beautiful* 65 degree weather for the first women’s pro race at the 2019 Tour of America’s Dairyland p/b Kwik Trip. A good chunk of the town came out to see Peta Mullens (Roxsolt Attaquer) snag the win in a bunch sprint ahead of Harriet Owen (Hagens Berman | Supermint) and Nat Redmond (Fearless Femme Racing). After a stage full of attacks and breaks, with a close call from Christina Birch (Point S Nokian) at seven laps to go, the race came back together to finish in a sprint to the line. 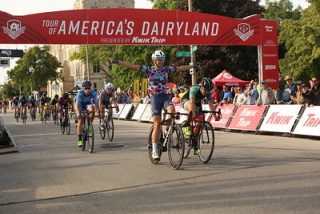 The first stage of ToAD in a Kenosha is a standard four-corner criterium course at around one kilometer long. Thankfully, the infamous, crash corner – corner two – had no major impact on the race. Throughout the stage, lots and lots of small groups of riders tried to jump off the front to get a breakaway going. Though the problem is that when more and more people want to join the move up front, they end up just dragging the whole field with them and you have to wait for things to settle somewhat before attacking again. About a third of the way through the race, Kaitlyn Agnew (Amy D Foundation) found herself off the front on her own. She was caught several laps later when a group of three tried to bridge the gap. With half of the stage still left to race, Agnew’s teammate Maddy Ward decided to have a go at forming a breakaway. Originally, she had been joined by Winada Spoor (Fast Chance Women’s Cycling p/b THTF), but was left alone at the front when Spoor fell back to the peloton.

With no one to work with, Ward was caught with 20 minutes left in the race. It seemed the stage winner would surely come from the field. But, with 7 laps to go, Christina Birch went on the attack. Her gap to the peloton continued to increase and it looked like she was going to pull it off. Kaitlyn Agnew of the early breakaway, among others, were brought to the front to chase Birch down. With the mad chase coming from behind, Birch was caught with about two laps to go. It was now certain that the win would come from a bunch sprint. Peta Mullens just beat out Harriet Owen for the win, with Nat Redmond coming in third. The omnium points lead went to Redmond who won the points prime halfway through the race. The Oarsman Capital Cat 2 leaders jersey went to Andrea Cyr (Velocause Centraal Cycling).

What clouds there were early on in the day parted, though as a result, the temperature started to cool off. While the temperature cooled off, the race heated up. In an extremely exciting stage where the breakaway managed to lap the field, Moritz Malcharek (Team LKT Brandenburg) won in a sprint ahead of Matthew Rice (Pro Racing Sunshine Coast) in second and Travis Wold (New England Devo p/b Cadence Wealth Management) in third. 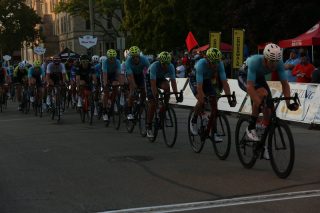 It took a while for the final breakaway to form, starting originally as a group of five, getting joined by another group of four to form a final group that stayed ahead for the rest of the race. It was an interesting scenario, it takes a lot for a smaller group of riders to lap the field. Being a lap up brings both challenges and advantages. For starters, you would now have an immense lead on the rest of the riders and your teammates can give you a lead-out for the finish, but it can also become a lot harder to keep track of your breakaway companions. The very international breakaway of nine included two Aussies from Pro Racing Sunshine Coast, Taj Jones and Matthew Rice. The two of them had another six teammates back in the pack, so we saw the team exercising the strategy of blocking. Blocking is where the team will go to the front of the peloton and try to slow the race down so it’s easier for the breakaway to get away or lap the field. On the other hand, riders like John Borstelmann (Team Marc Pro p/b Gym One) probably didn’t want to catch the field. They didn’t have a whole team to give them a lead-out for the sprint finish.

The breakaway did the inevitable and lapped the field with 18 laps to go in the race. There were little gaps and breaks that formed in the field as the riders wound up the pace. The race was really in full tilt. It all came down to the bike throw at the end where Moritz Malcharek won ahead of Matthew Rice and Travis Wold. Moritz Kaase (Volvo Markoetter Team) won the points prime and is now in the omnium leader’s jersey.

The riders are back at it again on Friday at the East Troy Cycling Classic.