The temperature was hot, but the pace was not – at least for the first half of the race. Friday was all about conserving energy because of the heat. Some riders did better at that than others. On her first stage racing in the 2018 Tour of America’s Dairyland p/b Kwik Trip, Samantha Schneider (ISCorp Pro Cycling) sprinted to the stage win in front of Rebecca Wiasak (Fearless Femme) and Harriet Owen (Hagens Berman Supermint). 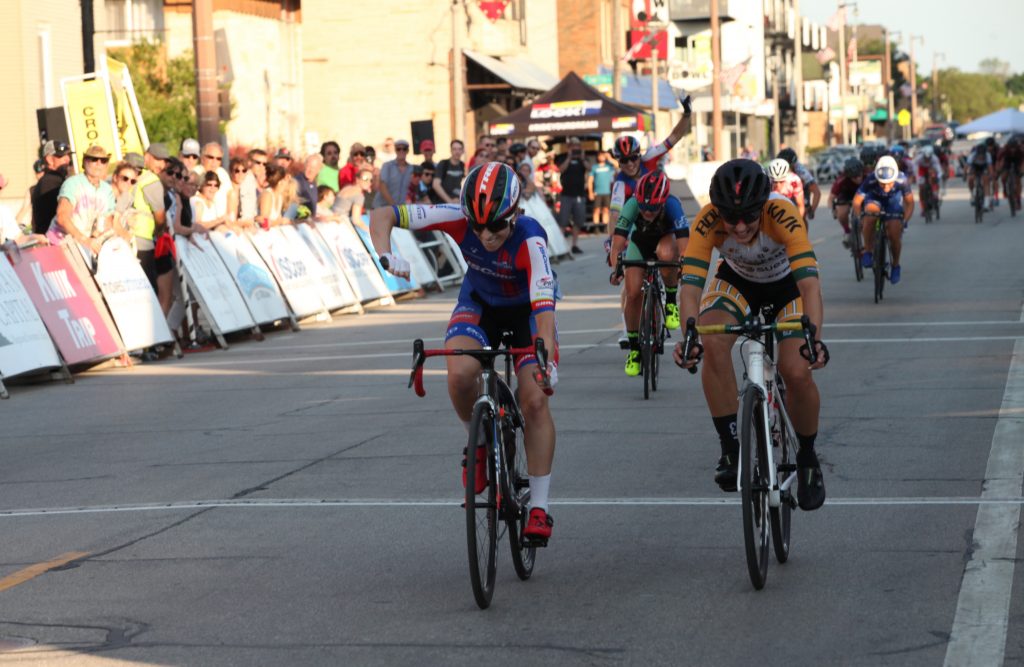 The group of 73 riders in the women’s Pro/1/2 category set off on an extremely warm Friday evening in Wisconsin. In Bay View, the temperature was in the 90s. The course for day 9 was very short, under one kilometer long. Each lap took just over a minute to complete. Since the course was so short, it actually provided good conditions for a breakaway. If a breakaway is able to get out of sight of the peloton, it’s harder for the peloton to chase because if they can’t see the people they’re chasing, they can’t gauge what speed they need to be going.

A couple of groups managed to get up the road before getting brought back, including a group of five that included the stage winner, Samantha Schneider. ISCorp Pro Cycling, Fearless Femme, and Japan Cycling Federation spent a good chunk of the day on the front of the peloton. Laura Jorgensen (Feed Hungry Kids Project) also had a very successful evening, winning four primes. After one of her prime wins, she decided to keep the pace high and see if she could stay away with 17 laps to go on the stage. Valentina Scandolara (Roxsolt Attaquer) joined Jorgensen with 14 laps to go. Both Miho Yoshikawa (Japan Cycling Federation) and Georgia Baker (Fearless Femme) tried to chase to get into the break of two, but neither did.

It looked like the small group of two would stay away until the end, but anything can happen in a race, and a lot did. On the back stretch of the course there was crash involving a big group of riders. Peta Mullens (Hagens Berman Supermint) had to come out of the race and many more riders including Lisa Howard (Crit Nasty) had flat tires and other problems with their bikes. The breakaway was later caught and with two laps to go, Kristen Arnold (The Meteor // Intelligentsia) went off the front of the main bunch. She too was brought back and in the final, it was a bunch sprint. Local favorite and West Allis native, Samantha Schneider took the win with Rebecca Wiasak in second and Harriet Owen in a close third. Sharlotte Lucas stays in the leader’s jersey and Amanda Seigle moves into the category two leader’s jersey.

The riders are at it again on Saturday for the penultimate stage, the Otto Wenz Cafe Hollander Downer Classic (don’t miss out on the super prime!).

On a blistering hot day, a huge field of 146 riders started on the extremely fast course of the 9th day of the 2018 Tour of America’s Dairyland p/b Kwik Trip at the Café Centraal Bay View Classic. A few riders fared better in the heat than others. For example, the yellow jersey, Luke Mudgway (H&R Block Pro Racing). It was an exciting (and slightly confusing) day for breakaways, but the final was clear. Luke Mudgway, the overall race leader, won in a final sprint after being in the breakaway of the day. John Borstelmann (Embrace the World Cycling) finished in second and Colin Strickland (Meteor X Giordana Racing) finished in third. 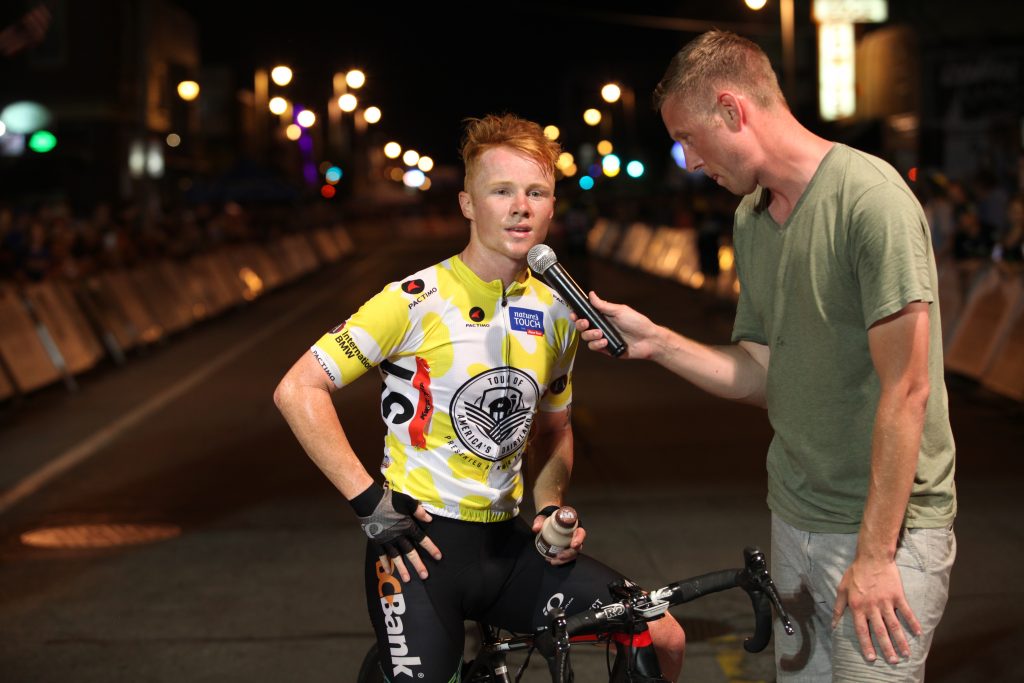 The course on Friday was short, fast, and a great course for a breakaway. On about the fourth lap in the race, the riders completed the four-cornered course in 1 minute and 7 seconds. It was a great day for breakaways because of how short each lap actually was. Each lap of the race had a distance of under one kilometer. If a break could get out of sight of the peloton, the peloton wouldn’t be able to gauge what speed they should go. This proved to be true when the first breakaway of the stage almost lapped the main bunch and the final breakaway actually did.

The first breakaway was a group of four riders consisting of Colin Strickland, Johnny Purvis (DNA Racing p/b Garneau), William Myers (Marc Pro Cycling p/b Gym One), and Chad Hartley (Velocause Centraal). The group of four got very close to lapping the field, but Strickland broke away 22 minutes into the race and became the closest to lapping the peloton. The other three riders got pulled back to the peloton. After going solo for 20 more minutes, Strickland began losing time. Soon, another breakaway – this time eight riders – formed off the front of the peloton. This group included the race leader, Luke Mudgway, who had missed the earlier move. Colin Strickland tacked onto the back of the break and it swept him up making it a break of nine. With nine laps to go, five of the riders in the break made it to the field and officially lapped them. Four of the riders did not make it to the field.

The riders would all finish on the same lap, even though five of them were technically ahead. As the race got closer and closer to the finish, the pace got harder and harder. The race looked pretty cool with all the riders racing under the street lights. The five breakaway riders stayed in the peloton instead of continuing ahead, so it was going to be a bunch sprint. Luke Mudgway was surfing the wheels of other riders, having no lead-out train. He sprinted to the line, celebrating perhaps a little early, but still finishing in front. John Borstelmann took second with Colin Strickland finishing in third place. Mudgway stays in the leader’s jersey and Alejandro Villada (INTENT) stays in the leader’s jersey for category two.

The riders are at it again on Saturday for the second to last stage of ToAD, the Otto Wenz Cafe Hollander Downer Classic (don’t miss it!).