After two days of racing through the rain and chilly temperatures, the third stage of the Tour of America’s Dairyland p/b Kwik Trip was sunny, dry, and warm – with a slight breeze off the lake at some points. Peta Mullens (Hagens Berman-Supermint) won the women’s Pro/1/2 stage in a bunch sprint beating out Sharlotte Lucas (Roxsolt Attaquer) and Lisa Howard.

The course for stage 3 was not your typical crit race course. It has six fast and tricky corners, and a slight uphill coming out of turn two. The homestretch is very long leaving plenty of room for a sprint coming out of the final turn. Each lap of the course was 0.85 miles long. Something that we saw for the first time this ToAD was an actual bunch sprint between all 59 riders (minus the 3 who did not finish).

Another difference between this stage and the previous two was that a breakaway never stuck. Most of the race was ‘cat and mouse’. At one point Katie Compton (ISCorp Pro Cycling) had a lead over the peloton of around 25 seconds, but was brought back. The bunch was all back together on the final lap, with the only question being, who had the legs to win today? In the end, Peta Mullens of Australia charged and came around Sharlotte Lucas in the final sprint to take the win. Lucas had gone early in the sprint, basically leaving it open to the rest of the field. 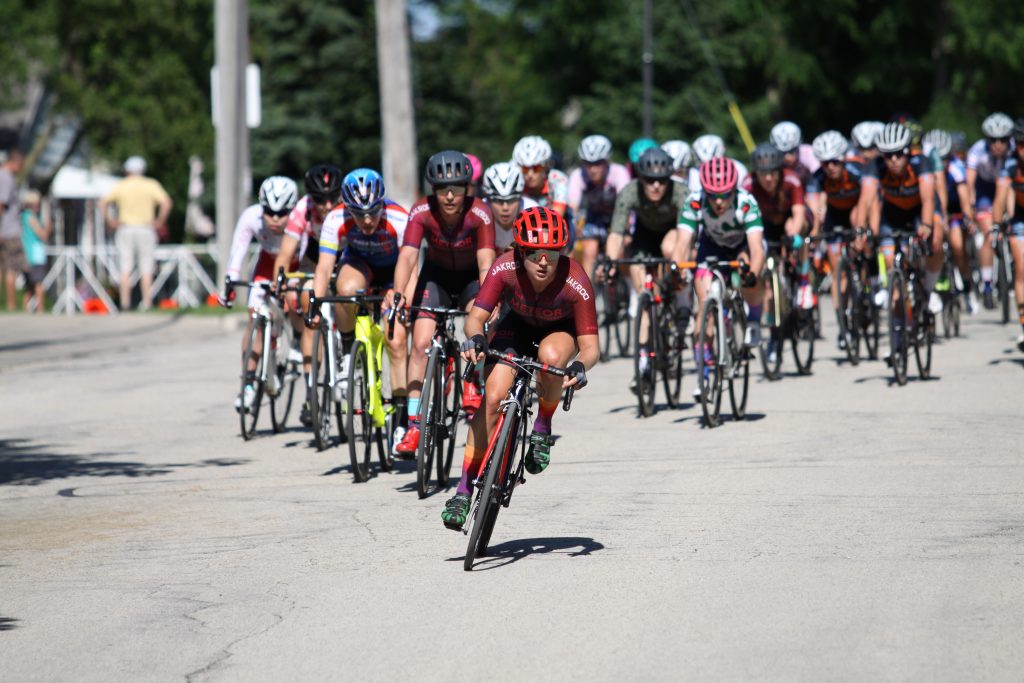 Mullens also won a couple of primes during the day, giving her a pretty great day in Grafton. Going into the stage, race leader Rebecca Wiasak (Fearless Femme) and Katie Compton were tied on points.

A shocker came late in the race, when Wiasak got a flat tire with about 5 laps to go. After six laps to go there are no free laps, so it would’ve been futile for Wiasak to get back in the race and try to make up an entire lap. Rebecca Wiasak did not finish the stage and lost the overall leader’s jersey to Sharlotte Lucas.

She’ll have a chance to win it back when the action continues tomorrow at the Waukesha Carl Zach Cycling Classic.

A huge group of 141 riders took to the streets of downtown Grafton in the Giro d’Grafton, the third stage of the 2018 Tour of America’s Dairyland p/b Kwik Trip. It was certainly an exciting (also sunny) race and it did not disappoint the fans. Philip Short (Nine Lives Carbon Repair) took the stage win in a sprint amongst the breakaway which just held off the charging peloton. The other members of the breakaway – Hugo Scala Jr. (Matrix/RBM) and Johnny Purvis (DNA RACING p/b GARNEAU) finished second and third.

This 0.85 mile (a little over 1 kilometer) course had six very fast turns and a small hill coming out of turn number two. On the first lap of the race, starting from a dead stop, the men set the fastest time of the day, 1 minute and 51 seconds. And it barely slowed down.  About 25 minutes into the race, there was a crash involving over a dozen riders in turn three. 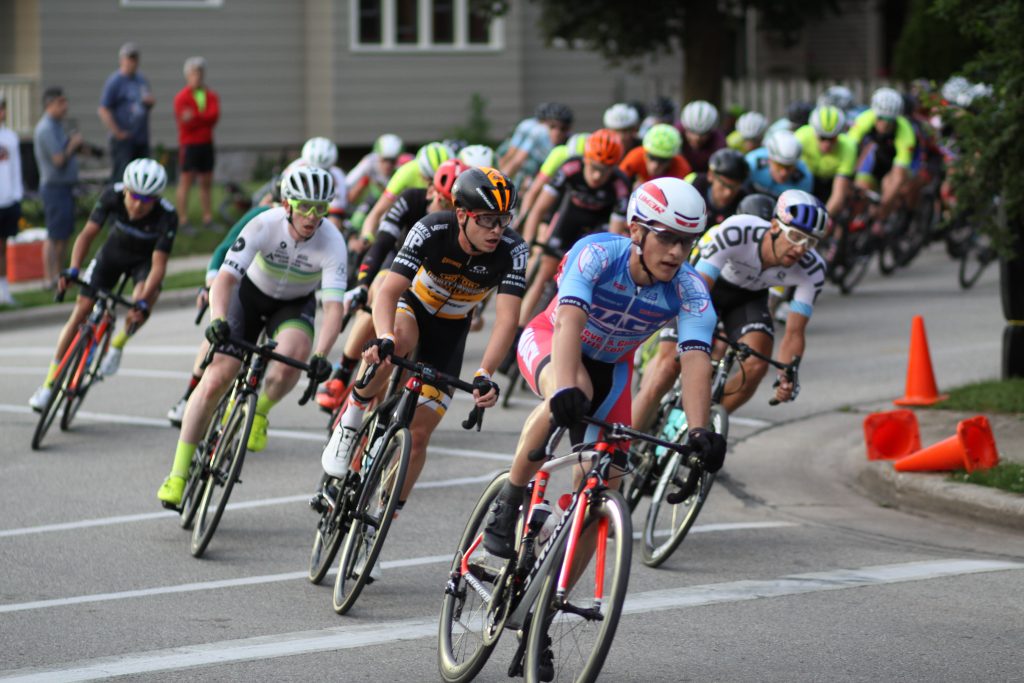 For the majority of the stage it was a game of ‘cat and mouse’. A group of three or four riders would go off the front and gain a lead of 15 to 20 seconds. They would stay out for maybe a lap or two, the most being three and then get drawn back into the group. Then a few laps later, the same thing would happen. With eight laps to go Johnny Purvis, Cameron Ivory of Australia, and Philip Short broke away from the peloton. Hugo Scala Jr. soon broke away too and tried to catch on to the back of the breakaway. With six laps to go, Scala Jr. latched onto the back. Then, on the next lap, Ivory was dropped, leaving only the other three out in front.

The gap shrank smaller and smaller as the race came closer and closer to the finish. On the final sprint, it almost looked like the peloton would catch the break, but they just barely stayed away, finishing a few seconds in front of the main bunch, Short edging out his rivals. On Saturday night, there were many primes won by many different riders. Luke Mudgway stayed in the leader’s jersey after the third stage.

Sunday, Mudgway will try to defend his jersey at the Waukesha Carl Zach Cycling Classic.