The 2019 Tour of America’s Dairyland p/b Kwik Trip has come to an end. The East Tosa Gran Prix was the final stage – the culmination of the largest competitive road cycling series in the U.S. It was a great race, Pip Sutton (Specialized Wolfpack p/b Jackroo) played her cards just right on Sunday and went away solo, like Saturday, but this time she made it the whole way and came away from the stage with a solo win. Coming in six seconds behind in second was Nat Redmond (Fearless Femme Racing) followed by Katie Clouse (DNA Pro Cycling Team) in third. 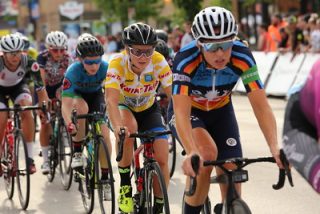 The East Tosa course is the definition of a classic four-cornered crit course. At 0.8 of a mile long, the course is a perfect rectangle. The women’s race started a little later in the day than planned due to some rain earlier in the day. By the time it got to the women’s race, the roads had dried out and the sun had really come out. Tosa is a pretty big town and a lot of it came out to watch the last stage. From the very beginning of the stage, there were small splits and gaps in the field with Beck Wiasak (Fearless Femme Racing) driving a hard pace on the front. The question on everyone’s mind was would Harriet Owen (Hagens Berman | Supermint) take another win? After all, sh had won six stages already. About a quarter of the way into the race, a group of three went on the attack, but it was a no go. Katie Compton (KFC Racing p/b Trek/Knight) was one of the riders who made frequent appearances on the front of the pack. As was usual, a couple small-ish primes went live after the points sprint. Peta Mullens (Roxsolt Attaquer) won a $100 prime and Emily Ehrlich (CWA Racing p/b Trek) came away with a $50 win. 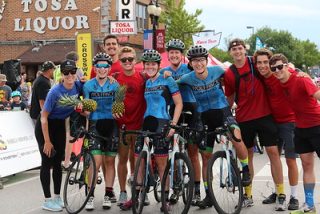 At eleven or twelve laps to go, Pip Sutton decided to try her tactics from the day before again. She had a real gap going for her with ten laps to go. The strange thing was that no one was really chasing. Ten laps seemed like a long way to go, but as Sutton said in an interview after the race, she won the pineapple-prime* on the back stretch of the course and that really gave her the extra boost she needed. As the lap counter wound down, Pip Sutton’s gap only seemed to grow. A big $1500 prime was what brought the gap back down. Harriet Owen came away with that prime win, but even that elevation in pace wasn’t enough to bring back Pip Sutton. She got a solo victory, finishing in front of Nat Redmond and Katie Clouse. Harriet Owen won the overall omnium in front of Nat Redmond and Peta Mullens. Mullens was able to keep her points lead and won the Lowlands Points classification. Andrea Cyr (Velocause Centraal) finished strong and won the Oarsman Capital Cat 2 classification, a lead she had been holding on to for the entire race. Congrats to everyone for an amazing race this year!

Going into the final race of the series, it was set up to be a tight battle for the overall win. Cesar Marte (RCC) was in yellow, but the Pro Racing Sunshine Coast Rider, Matthew Rice was close behind and with a strong team to support him, he has a good shot at taking the overall lead back. On the stage, a breakaway of three got away and it was Moritz Malcharek (LKT Team Brandenburg) who came away with his third stage won of the tour. His breakaway companions, Wolfgang Brandl (ADHD Catella) and Tobin Ortenblad (Donkey Label Racing) finished close behind in second and third respectively.

Tosa really puts on an impressive scene surrounding this bike race, tons of people come out to watch and it’s a great atmosphere. The riders do their part too, putting on a great show for anyone who’s watching – it’s always a fun race. The first attack on the stage didn’t come until eight minutes in when Jadon Jaeger (Meteor-Allied) went off the front. He stayed out in front for a considerable amount of time but it being a ninety minute race, the field wasn’t too worried about chasing just yet, though he was eventually brought back. You could tell it was a very fast race because although not too many people were falling off the back, the field was really strung out. There were a few more attacks off the front of the bunch, but the points sprint was coming up and as a result, the field’s pace went up, making harder to form a successful breakaway group. John Borstelmann (Team Marc Pro p/b Gym One) was able to win the points prime, securing his overall lead in the Lowlands Points Jersey. After the halfway point, two more $100 primes were thrown to the race with Stefan Schäfer (Radsport.Land) winning both. The last prime of ToAD 2019 was $50, won by Wolfgang Brandl, who after going off the front to get the prime, stayed out off the front on his own. 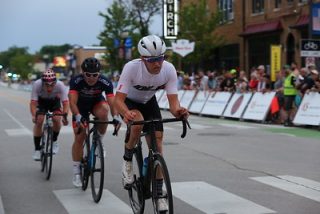 With eleven laps to go, there was a big crash in the first corner and although there were no serious injuries, Cesar Marte, the current overall leader, was forced to go back to the pit to get a new bike. This meant that he was going to have to get back into the race successfully and do well enough in the sprint on a bike that was not his own to keep his overall lead. Back at the front of the race, Brandl was still off the front and Moritz Malcharek and Tobin Ortenblad had bridged the gap. Now it was three strong riders at the front and those three riders had a gap of around 22 seconds with five laps to go. Even with a ferocious chase coming from behind with Sunshine Coast on the front of the field, the three out front were able to stay away. It was Malcharek who won out of the three breakaway riders in front of Brandl in second and Ortenblad in third. When it came down to the overall lead, Matthew Rice was the winner by one point over Cesar Marte and Moritz Malcharek finished in third. John Borstelmann kept his lead and won the Lowlands points classification and Travis Wold (New England Devo p/b Cadence Wealth Management) kept his lead and came away the overall winner of the Oarsman Capital Cat 2 classification.

Thanks to everyone for coming out whether it was to watch or to race or both, it was an amazing eleven days – we can’t wait to see you again next year!