It was a truly beautiful day for a bike race; by the late afternoon it had cooled down to a great temperature with minimal wind, and the sun was still out. The race didn’t have a delayed start and the women raced for the full hour. Th race started out fast and it only got faster. Harriet Owen (Hagens Berman | Supermint) won yet another stage, beating Peta Mullens (Roxsolt Attaquer) to the line in second and Nat Redmond (Fearless Femme Racing) to the line in third. 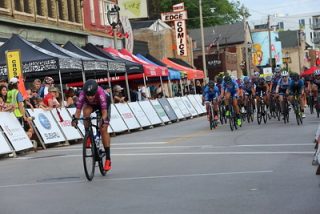 One thing that was sort of out of the ordinary was we saw Beck Wiasak (Fearless Femme Racing) riding at the front of the pack for once, not in her usual spot at the back. The course itself was sort of a bow tie shape with six corners. Corner 2 was the worst of them, being over 90 degrees – 120 degrees to be exact. Due to the high pace and the nasty turn 2, riders were shed off the back of the pack from the very beginning of the race. There was a good mix of riders who appeared at the front of the peloton to drive the pace. It wasn’t until about 20 minutes into the race that two riders – Emma Chilton (Roxsolt Attaquer) and Laura Jorgensen (Fast Chance Women’s Cycling p/b THTF) – tried to go off the front, but with Katie Compton (KFC Racing p/b Trek/Knight) driving the chase, they were quickly pulled back to the field. Next, it was Winnie Spoor (Fast Chance Women’s Cycling p/b THTF) who tried to go off the front, but was brought back and it was her teammate, Rachel Langdon who went after her. The bunch was back together again at the halfway point and it was the Lowlands Points leader, Peta Mullens, who won the mid-race point sprint. After the point sprint, at twelve laps to go, it was Pip Sutton (Specialized Wolfpack p/b Jackroo) who tried to take a look off the front. She too was brought back to the bunch as Laura Van Gilder (Mellow Mushroom) jumped off the front to take a $100 prime win. With six laps to go, a group of three containing Laura Jorgensen, Pip Sutton, and Abby Krawczyk (Orion Racing p/b Borah Teamwear) decided that solo attacks weren’t working, so they went off the front as a group.

The sprinters were determined to have the stage end in a bunch sprint and were able to reel the group of three back in. It was Winnie Spoor who tried to jump off the front one more time with three laps to go on the stage – she was brought back in during the next lap. Once again, with one lap to go, the entire group was back together. When it came to the sprint in the end, it was the ever consistent Harriet Owen who took the win ahead of Peta Mullens and Nat Redmond. With the help of the win, Harriet Owen kept her overall lead while Peta Mullens also kept her lead in the Lowlands points jersey and Andrea Cyr (Velocause Centraal) kept her lead in the Oarsman Capital Cat 2 leader’s jersey.

As it was for the women’s race, the weather was absolutely great for a bike race, a Bay View certainly does know how to put on a bike race. The crowds were amazing – it was a tunnel of noise coming down the finishing straight. It was the German, Moritz Malcharek (LKT Team Brandenburg) who won in front of the two Pro Racing Sunshine Coast riders, Matthew Rice in second and Taj Jones in third.

On the very first lap of racing, Hayden Strong (Texas Roadhouse Cycling) thought it was a good time to take a look off the front, but with ninety minutes of racing ahead of him and a field determined to catch him, Strong was pulled back in soon after his early attack. Through the early part of the race, we saw two main teams driving the pace up front, the big Australian team, Pro Racing Sunshine Coast, and the team of juniors – LUX/Stradling p/b Specialized. It was a little while before anyone tried another big attack. At about twenty minutes into the race, Stefan Rothe (ELBOWZ Racing) decided to go on the attack along with Seth Callahan (LUX/Stradling p/b Specialized) who won a $50 prime soon after. Once again, the two-man breakaway was brought back by the chasing field. Then again, at thirty minutes into the race, Tobin Ortenblad (Donkey Label Racing), Peter Olejniczak (Project Echelon Racing), and Stephan Hoffman (Team Clif Bar), the guy who forgot his kit, tried to have a go and get away. Once again, a persistent field reeled them back in. 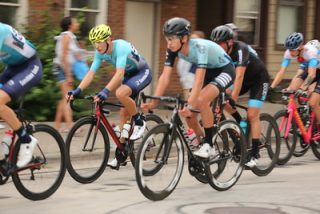 After that, people mostly stayed in the pack, besides sprinting for primes. The eventual third place winner on the stage, Taj Jones, came away with a big $500 prime win close to the end of the stage. As the stage neared its end, both the Aussies and the Germans had a clear presence on the front of the field. Though in the end, it was the German, Moritz Malcharek winning by inches in front of Matthew Rice who took second and Taj Jones who ended up taking third on the stage. Cesar Marte (RCC) stays in his yellow jersey while Lachlan Holliday (Piedmont College) keeps his lead in the Lowlands Points jersey. Travis Wold (New England Devo p/b Cadence Wealth Management) also kept his lead in the Oarsman Capital Cat 2 leader’s jersey.

The riders pick it up again for the penultimate stage of ToAD 2019 on Saturday at Downer – come check it out!