Due to severe thunderstorms, the women’s pro/1/2 race was delayed by almost two hours and the men’s pro/1/2 race was cancelled for the night, though some of the men’s field still came out to watch and cheer on the women. In the cold and on wet roads, the yellow jersey, Harriet Owen (Hagens Berman | Supermint) came out of nowhere to win the stage ahead of the junior, Katie Clouse (DNA Pro Cycling Team) in second and Katie Compton (KFC Racing p/b Trek/Knight) in third. 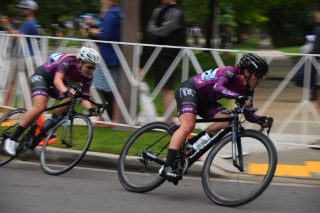 As the race started, steam was coming off the road as the thunder and lightning continued to roll away in the distance. The first lap of the 1.2 mile course was a relatively slow and cautious one, most likely due to a couple tight corners and a chicane on wet paint on the road. A lot of the time, it isn’t wet pavement that causes the big issues or crashes while racing – it’s the paint marking the lines in the road that are the most slippery and the most dangerous. At the second lap in the race, the points leader, Peta Mullens (Roxsolt Attaquer) was able to win a big $300 prime. After the prime sprint, it looked as though Beck Wiasak (Fearless Femme Racing) was falling off the back, but as we’ve seen throughout the series she was really playing mind games with the rest of the field. Almost every time she’s been ‘off the back’ she’s been able to make it back into the peloton. A two place prime about a quarter of the way through the race saw Rachel Langdon (Fast Chance Women’s Cycling p/b THTF) take $100 and Charlotte Culver (Fearless Femme Racing) take second place with $50. Twenty minutes into the race, Katie Compton, along with Maddy Ward (Amy D Foundation), tried to take a look off the front. They managed to stay away for a little bit, but were ultimately pulled back to the field. Lauren Perry (Fast Chance Women’s Cycling p/b THTF) pulled off a prime win of $400 close to the halfway point in the race. The points leader herself, Peta Mullens, was the one who won the Lowlands Lion Points prime halfway into the race.

There were a few big primes thrown in, towards the end of the race – Emma Chilton (Roxsolt Attaquer), Emily Ehrlich (CWA RAcing p/b Trek), and Laura Jorgensen (Fast Chance Women’s Cycling p/b THTF) each won one. Since no breakaway was able to go, the stage ended in another bunch sprint. Harriet Owen, who we hadn’t yet seen in the race, came to front and sprinted to a win, ahead of Katie Clouse in second place and Katie Compton in third place on the stage. Andrea Cyr (Velocause Centraal) kept her lead in the Oarsman Capital Cat 2 leader’s jersey, Harriet Owen kept her lead in the overall classification, and Peta Mullens also kept her lead in the Lowlands Points jersey.

The riders will be back at it again Friday evening in Bay View!

And after a stage that saw several riders sent to the hospital following crashes, here’s wishing everyone nursing injuries a speedy recovery and return to the bike.