Well, we hoped for nice or at least better weather at West Bend, but what we got was some rain. Although it was raining relatively lightly for the women’s race, there had been a downpour during the prior race and as a result, the roads were still wet in most places. The women also only raced for 50 minutes on Monday as opposed to an hour. The weather can mess things up and to keep everything close to their scheduled times, we had to shorten a few things. Once again, there was no successful breakaway and the race ended in a bunch sprint. Harriet Owen (Hagens Berman | Supermint) won in front of Nat Redmond (Fearless Femme Racing) in second and the ever consistent Peta Mullens (Roxsolt Attaquer) in third. 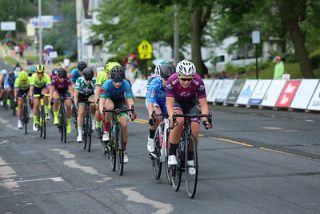 The six-cornered, hilly course in addition to the weather proved to be a challenge for every rider. Once again, early in the race lots of splits and gaps appeared and even last year’s winner, Beck Wiasak (Fearless Femme Racing) found herself at the wrong end of a split. At 31 minutes into the race, Laura Jorgensen (Fast Chance Women’s Cycling p/b THTF) jumped off the front of the pack to have a go at a solo win. After one or two laps out on the front, Jorgensen’s gap continued to grow and became a huge gap. And after a lot of work, Beck Wiasak managed to make contact with the bunch again and was back in contention.

The field really started to ramp up the chase pace with eight laps to go and with seven laps to go, the sun actually started to come out. Jorgensen was still out off the front, but her gap had lowered to around ten seconds with seven laps to go. With Specialized Wolfpack p/b Jackroo on the front leading the chase, Jorgensen was brought back to the pack with five laps to go. At five laps to go the race was all back together and it was there was no chance of anyone else getting off the front for the win. The finishing straight is on a slight hill, which added to the difficulty of the stage. The crowd saw a very familiar podium on the stage. Harriet Owen won the stage ahead of Nat Redmond in second and Peta Mullens in third. Andrea Cyr (Velocause Centraal) kept her lead in the Oarsman Capital 2 leader’s jersey while Harriet Owen moved into the overall omnium lead and Peta Mullens stayed in the Lowlands Lion Points Jersey.

The rain wasn’t too bad for the women’s race, but the same cannot be said for the men’s. A race that was scheduled to be 75 minutes long was given three laps to go at 45 minutes into the race. Seconds before the skies really let loose to a torrential downpour, Taj Jones (Pro Racing Sunshine Coast) sprinted to a win ahead of George Brian Jackson in second and Ismael Collado Acosta (RCC) in third.

The second day in a row where we’ve seen Justin Poulson (Semper Porro), a rider who has consistently ridden at the back, come to the front. On the first lap, he went out in front, but the move didn’t stick. About ten minutes into the, Ed Veal (Real Deal Racing) went on the attack and again, the move didn’t stick. It was Jadon Jaeger (Meteor-Allied) who made the move that stuck at around 15 minutes into the race. John Borstelmann (Team Marc Pro p/b Gym One) and Hayden Strong (Texas Roadhouse Cycling) jumped off the field to try to chase Jaeger down. Strong and Borstelmann were brought back before they could catch Jaeger out in front. 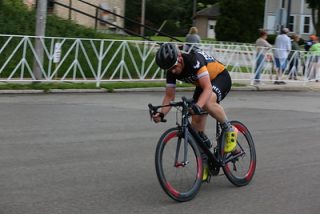 At around 40 minutes into the race, just before the race was called, Jaeger was brought back to the field. Almost as soon as the racers were given three laps to go, it started pouring. The race course was sketchy enough with wet spots, but once puddles started forming on the course, it got even more dangerous. As the race rushed to the finish line, riders fell off the back of the field. In the rain, it was Taj Jones who won with George Brian Jackson close behind in second and Ismael Collado Acosta following in third. Matthew Rice (Pro Racing Sunshine Coast) moved into the overall lead and Travis Wold (New England Devo p/b Cadence Wealth Management) kept his lead in the Oarsman Capital Cat 2 leader’s jersey. Lachlan Holliday (Piedmont College) stays in the Lowlands Lion Points jersey as well.

The riders are all going down to Janesville – Primetown USA – on Tuesday, come and check it out!