Anyone who went to the first stage in Kenosha might have thought they were experiencing deja vu, well, nearly deja vu. It was the same three people on the podium, just in a different order at the East Troy Cycling Classic – day 2 of the Tour of America’s Dairyland p/b KWIK TRIP. As opposed to a second place in Kenosha, Harriet Owen (Hagens Berman | Supermint) took the win ahead of Peta Mullens (Roxsolt Attaquer) in second and Nat Redmond (Fearless Femme Racing) in third. 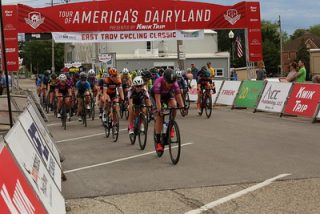 Another classic four-corner course, the East Troy stage has one of the shortest courses we’ll see throughout ToAD at just under a kilometer long. Having a course that short could make it easier for a breakaway to lap the field, but it also makes it harder for a group of riders to successfully ride off the front. Relatively early in the stage, a couple of groups tried to form a breakaway, but none were triumphant. The attacks settled down and the field stayed together for the most part. East Troy was a stage with a lot of primes. Much of the excitement of the race came from sprints for primes, everyone was going for them. Skylar Schneider (Boels Dolmans Cycling Team) won one early on in the race, Peta Mullens beat Beck Wiasak (Fearless Femme Racing) by inches to win another. Some other prime winners from the day were Pip Sutton (Specialized Wolfpack p/b Jackroo), Thialor Rinae Mize (Los Gatos Bicycle Racing Club), and Lauren Perry (Fast Chance Women’s Cycling p/b THTF).

Towards the end of the stage, there were a few late attacks including one from last year’s overall race winner Beck Wiasak. In the bunch sprint, three familiar riders kept on form with the British rider Harriet Owen winning ahead of the two Aussies, Peta Mullens and Nat Redmond. Owen moved into the overall lead, while Andrea Cyr (Velocause Centraal) stayed in the Oarsman Capital Cat 2 leader’s jersey. Lauren Perry also moved into the lead of the Lowlands points jersey.

For a small town, East Troy certainly knows how to put on a bike race. Lots and lots of people came out to watch the Men’s Pro/1/2 race on Friday nights and the riders definitely put on a show. A late attack in the stage proved to be a success for the German, Stefan Schäfer (Radsport.Land) who won the stage ahead of Cesar Marte (RCC) and Chad Hartley (Velocause Centraal).

As with any race that happens as the sun is setting, the temperature dropped into the mid to low 60s. After the breakaway lapped the field on stage one, the field wasn’t going to let it happen again. An early break started 6 minutes into the race with Peter Olejniczak (Project Echelon) and Dylan Simpson. They were later joined by six other riders, though once more people try to bridge the gap, they usually end up dragging the entire peloton with them and the break fails – and so it did. It was a prime heavy stage, one of the winners, Justin Poulson (Semper Porro), came away with $500 and put on a show, showing off his bike skills as he jumped over the finish line. Throughout the stage more riders tried to go on solo attacks, but again, the bunch wasn’t going to let anyone lap them two nights in a row. 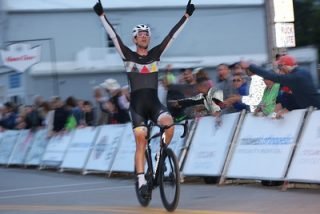 With six laps to go, Stefan Schäfer decided to give it a go. He was really strong for the first few laps, he looked like he was fading, but the field still wasn’t chasing. It wasn’t until two or three laps to go when the peloton really started to put on the pressure, but there was no catching Schäfer. The German rider powered to a solo victory ahead of Cesar Marte and Chad Hartley. Moritz Kaase (Volvo Markoetter Team) kept his lead in the points jersey while Stefan Schäfer moved into the overall lead. Travis Wold (New England Devo p/b Cadence Wealth Management) also kept his lead in the Oarsman Capital Cat 2 leader’s jersey.

All the riders will pick it up again at the Giro d’Grafton on Saturday.