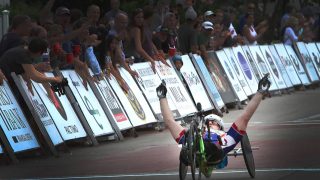 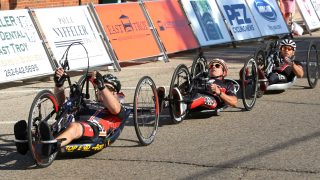 “USA Cycling is excited to award the Para Criterium Nationals to the Tour of America’s Dairyland,” said Chuck Hodge, vice president of Operations, USA Cycling.  “Awarding these Nationals reflects the support that ToAD and southeastern Wisconsin has shown for para and handcycling.”

“The great thing about handcycling is you leave your chair. You get on the handcycle and you feel like you are not disabled,” he says. “Racing in southeast Wisconsin and being part of ToAD is the perfect place to showcase the sport of handcycling to the public.”

Aside from the Para Nationals in Grafton, open to US athletes only, handcyclists will race in the penultimate event of each day’s schedule right before the Men’s Professional races in Kenosha, East Troy and Waukesha. In those three races, handcyclists will compete for daily race leader’s jerseys, overall Handcycling Classic winners’ jerseys and championship, as well as prize money.

“The strength, stamina and pure speed generated by these athleteselevates the entire ToAD series,” says ToAD Handcycling Race Director John Haupt. “Handcycling and Para-Cycling deserve to be included in major bicycle races everywhere. Having them together here at ToAD moves us in that direction. In addition to raising the profile of these sports, hosting the Classic and Nationals puts Wisconsin and ToAD on the map as a destination for para and handcyclists.”

That’s already happening as the Paralyzed Veterans of America Racing Team, including Carlos Moleda, arrives in the Milwaukee metro area a week prior to ToAD for a training camp in Delafield. The team expects to field about a dozen members at the Handcycling Classic and Para Nationals.

Additional sponsorship and support for the IndependenceFirstHandcycling Classic presented by ISCorp is provided by Invacare, Body Mechanics physical therapy, Rebel Wipes and Mishlove and Stuckert, LLC.

ToAD was started in 2009 and extends the legacy of multi-day bike racing that first started in Wisconsin in the late 1960’s. It has become one of the most popular bike race series in the sport earning an outstanding reputation for delivering a world-class race experience for both participants and spectators. In 2017, nearly 1,000 racers from more than 40 states and 15 countries participated in ToAD with an average of 450 racing daily. Overall an estimated 100,000 spectators attended races and other special race-day events in host communities.

Images and logo available at: